The Gates to the Rocky Mountains

At Three For Lewis & Clark, the transition from prairie to mountain along the Missouri was extremely abrupt. As the river winds its way slowly through the prairie three significant landmarks clue the expedition, of the dramatic change about to occur. The most obvious being the approach of the Rocky Mountain Front, looming ever larger on their westward approach. Second is the accent or portage of the Great Falls climbing in a short amount of distance, 10 miles, 412.5 feet in elevation. Lastly, a strange formation, to the north, which Lewis referred to as Fort Mountain. Fort Mountain’s appearance is that of a perfectly formed cone, which has been sheered near it’s base, as if with a razor, to form a flat mountain, hundreds of feet high and miles across, 360 degrees round. Famed western artist, Charlie M. Russell couldn’t resist utilizing this unique structure as backdrop in many of his paintings. We know this mountain as Square Butte.

The Gates of the Mountains near Helena

Once Square Butte’s path has been crossed, cliffs begin to rise on either side of the river, significantly after passing Half-Breed rapids. These cliffs are nothing like the White Cliffs, rising much higher and being consistent walls rather than separate towers. Where there are individual cells of rock, they don’t take on column like shapes, but appear to be more like massive boulders dropped from the sky, the best example being Mountain Palace. Along this corridor a dam has been erected within the lower section named Holter Dam. Between upper Holter lake and lower Holter lake the canyon becomes much more extreme and grand, with walls towering thousands of feet high.

There are ferry boat tours offered to the public between upper and lower Holter lake’s, touted as “The Gates of the Mountains. Having floated this area and its tributaries more than any other water, in our lifetime’s, it is the belief of the authors, that Lewis & Clark considered “The Gates” to be much more than just the small stretch from upper to lower Holter. The Dearborn River, named after Henry Dearborn, the Secretary of War, and the Smith River, named after Robert Smith, the Secretary of Navy, for example, are similar canyon rivers located just below the Holter corridor, leading us to conclude that Lewis & Clark considered “The Gates of the Mountains” (which they named) to be just that. The beginning of the mountains. Therefore, the gates begin at Half-Breed rapids, just below Hardy creek, continuing through the Holter Recreation Area, ending at Canyon Ferry. 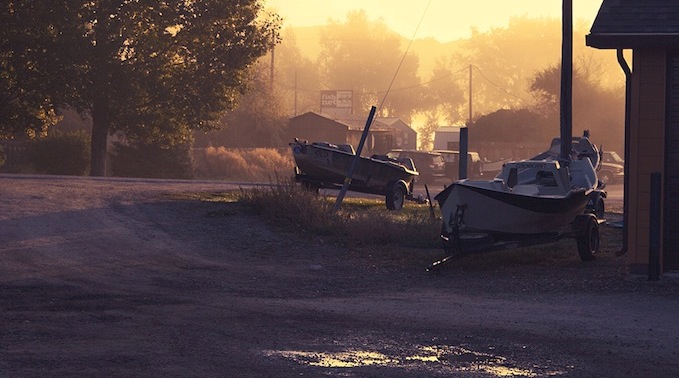 Along the “Gates of the Mountains” corridor their are numerous campgrounds, and the area below Holter Dam to Half-Breed Rapids, is some of the best blue ribbon trout fishing in the entire lower 48 states, with many guides and outfitters offering float and fishing trips. Eleven miles west of Canyon Ferry, is the historic, gold boom city and capitol of the state, Helena, Montana, one of the most beautiful and interesting cities in the state.