The White Cliffs of the Missouri

Between Fort Benton and the Judith River confluence are the White Cliffs, considered to be one of the most scenic floats along the entire Missouri River. The town of Fort Benton is the oldest known settlement in the state of Montana, celebrating its 150 year anniversary this spring and summer of 1996. Steamboats venturing up the river from St. Louis were stymied from continuing further due to the Great Falls of the Missouri. The original fort was founded in 1846 and became a fairly large trading post. Where the Judith River flows into the Missouri is Judith Landing, a stopping post for steam boats before they climbed the final leg to Fort Benton. It is this portion of river that was, and still is today, hauntingly beautiful. There are formations of white limestone intermixed with dark volcanic intrusions, reaching skyward as columns, statues and towers, as if sculpted by the hands of some ancient, lost civilization. Lewis & Clark were the first known white men to visit this stone graveyard, vividly describing what their eyes were seeing.

Near Eagle Creek, this tranquil scene is reminiscent of a Karl Bodmer painting.

In 1833, Prince Maximilian zu Wied, just upriver from the Musselshell, named the doorway of this strange world the White Castles, “Two towers, crowning hills on the south bank adorned with windows.” As he continued up river he described the White Cliffs in his journal, “Here, on both sides of the river, the most strange forms are seen, and you may fancy that you see, colonnades, small round pillers with large globes or a flat slabe at the top, little towers, pulpits, organs with their pipes, old ruins, fortresses, castles, churches with pointed towers… Almost every mountain bearing on it’s summit some similar structure.”

In the White Cliffs Canyon, some of the more formidable structures have been nicknamed over the years. Names like: Steamboat Rock, Citadel Rock, Hole-in-the-Wall, Eagle Rock, La Barge Rock and Pilot Rock.

Just upriver from the White Cliffs and down river from Fort Benton is the Marias River confluence with the Missouri.

Named by Captain Meriwether Lewis in 1805, in honor of a cousin it is said he was smitten with, from his journal: “I determined to give it a name and in hounor of Miss Maria Wood; called it Maria’s River. It is true that the hue of the waters of this turbulent and troubled stream but illy comport with the pure celestial virtues and amiable qualifications of that lovely fair one; but on the other hand it is nobel river; one destined to become in my opion an object of contention between the two great powers of America and Great Britin, with respect to the adjustment of the north westwardly boundry of the former; and that it will become one of the most intresting branches of the Missouri.” 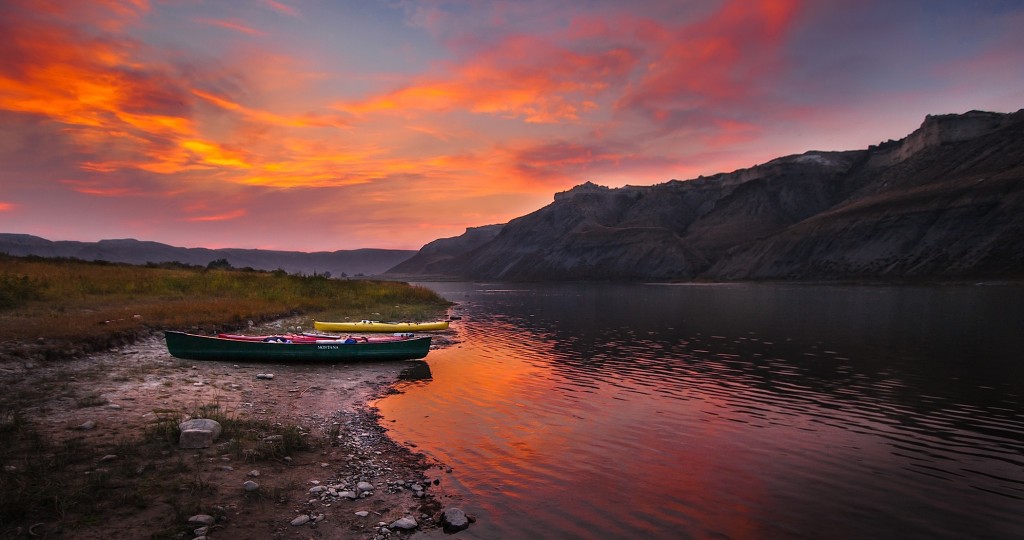 Camping at the Hole in the Wall.

Though Lewis may have waxed poetic about the Marias, this river turned out to be a time consuming nuisance. Not knowing which fork was the headwaters to the Missouri, one party was dispatched up the Marias, while the main group continued up the main river. Upon realizing the Marias was a false route labeled there final camp, Camp Disappointment. 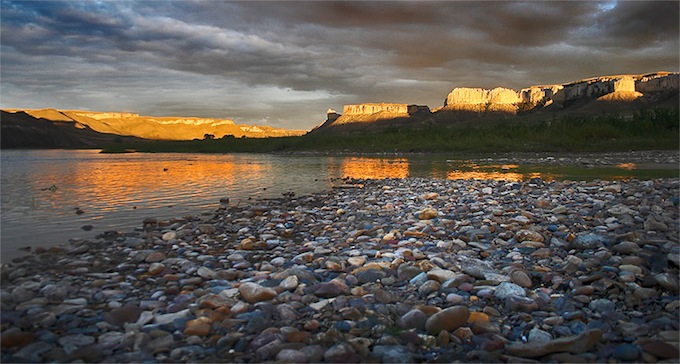 A view of the Hole in the Wall

There are at least nine different public access campgrounds along the portion of river between Fort Benton and Judith Landing. The Bureau of Land Management provides a waterproof, two map edition called Upper Missouri National Wild & Scenic River that covers this corridor, along with showing the campsites of Lewis & Clark. The Fort Benton Museum and Old Fort are also a must see, before beginning a float through the White Cliffs.