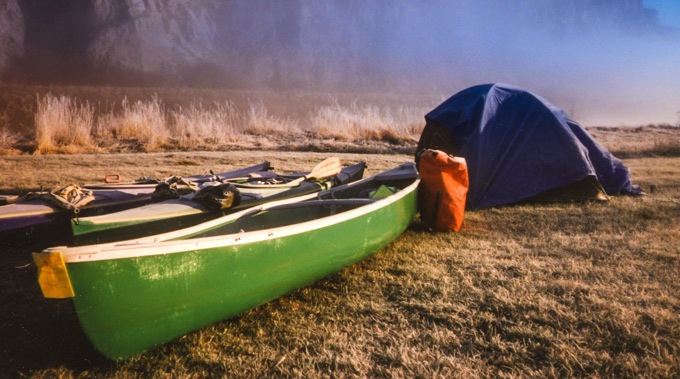 Well the “boys” are on their way! After a GREAT send-off party at the Missouri River State Headwaters Campground on Saturday night we awoke to “heavy” frost. It was COLD!!!! It was very COLD all night! Not much sleeping occurred! But it did not deter anyone. 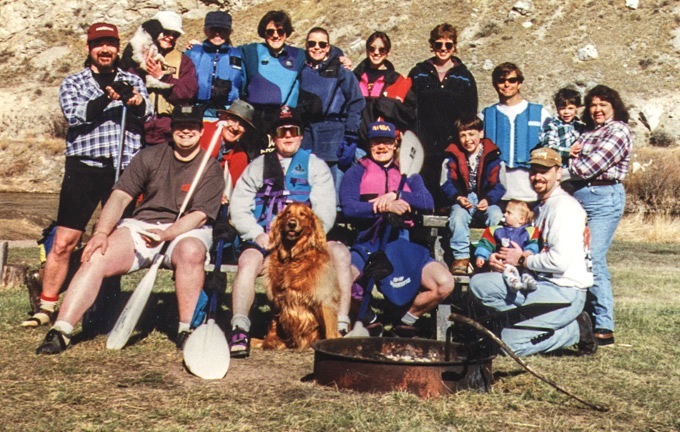 At approximately 10am the “launch party”, consisting of ten well-wishers and Roland and John set out on the official Rojomo River Expedition. I don’t think either Roland or John really believed it was actually happening. Maybe later today, when the launch party has to get off the river and return to their “normal” lives and the boys are left alone they may be realizing for the first time that the Missouri is going to be home for the next two months!

I should be hearing from them some time this week as they are not far from civilization. I will keep you posted, and if all goes well they expect to be on Lower Holter by the weekend. 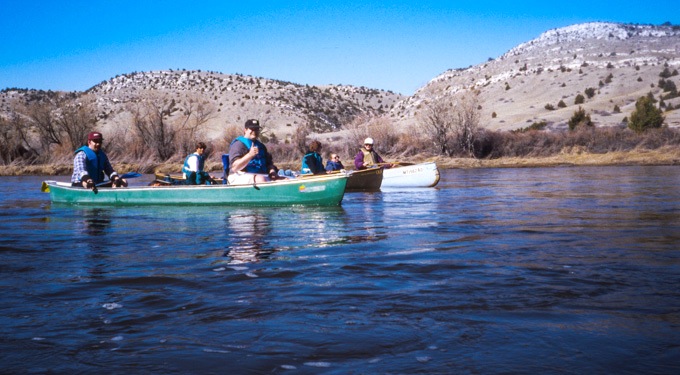 Part of the first day flotilla.

Received a message today that they are now in Townsend, MT which is approximately 40 to 50 river miles from their departure. They portaged their first dam, Toston Dam, with no difficulties due in part to the addition to their gear of a great wheel carrier for the kayaks. They had the wheel carriers made of aluminum and plastic lawn mower wheels so they would be light and small. These allow them to pull a fully-loaded kayak around the dams as opposed to unloading, hauling the baggage and then carrying the kayak around. It saves a lot of trips! 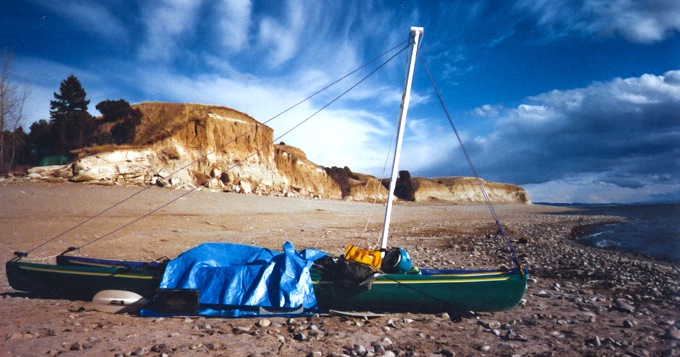 Thanks for checking up on us.

Talked to the “boys” today about noon….they said, “We’re cold!!!” But they also sounded in good spirits and told me that they sailed on Tuesday, it was fun, but not for long because Roland was sick with food poisoning/flu/hypothermia! So when they reached Canyon Ferry Lake, they pretty much just got to shore. Roland put up his tent and crawled into his sleeping bag for a couple of hours while John did all the camp chores….

Wednesday, they said, was VERY windy and Roland liked the four foot waves on the lake, said it was a blast! John was not too thrilled, so they waited and paddled after dark. Again, John was not thrilled. But they saw the Comet (it’s still there) and the Northern Lights.

Today they got on the water by 8am and at noon were at Yacht Basin Marina at the end of Canyon Ferry Lake. They said they were eating in the restaurant, getting warm and calling Montana Power to portage them and their gear around Canyon Ferry Dam.

They are approximately one to one and a half days off “my” schedule, but should be at Upper Holter Lake sometime Saturday. Hopefully I will meet up with them there so I can stop writing so much here and let them tell you what is going on from their journal entries.

Ten other support crew members came to see us off and launch with us. The day could not have been more beautiful, rich warm sunlight, gorgeous scenery, wonderful people. Every 10 to 20 minutes huge, long trains would pass or approach us on our right, blasting their horns in greeting. In what seemed like no time, we had arrived at Toston Dam. While our crew ran shuttle, we pitched our camp and awaited the inevitable good-byes.

Day two would prove to be just as beautiful as launch day and all we really did was sit in our boats and soak in our surroundings. In the town of Toston, while getting a Coke, a truck pulled up and offered greetings. A husband and wife who had seen our boats from the bridge above. After discussing Rojomo, the man said this to us, “I just heard the weather and they say “something’s” gonna happen tomorrow!” We continued ahead and came across many assorted birds. Geese nesting, hawks and eagles circling the thermals, pelicans in groups of five to ten and an intriguing tree which held up to 30 heron nests. Within no time we reached Townsend and our campground. We walked into town and indulged in some of the local fare.

All night the wind blew gusty, so before we would tackle Canyon Ferry Lake, we erected the kayak sail. Before we launched a grandmother and her four-year-old grandson came to see us off. We never got their names, but they stayed with us throughout our packing, erecting, and launching. One mile down river we started picking our way through the duck ponds on the south end of Canyon Ferry, finally breaking free out onto the lake itself. We hoisted the sail and about 10 minutes later the wind completely died! Roland proceeded to go into a spiel about how every time he puts that damn sail up the wind just disappears. I was content to kick back and fish. At a little after noon, “something” happened! Roland proceeded to get sicker and sicker, from something he had eaten, and the wind kicked up. Come 1pm we were really jammin’ on the lake when “something REALLY happened!” The sky was overcast and the wind velocity tripled like almost in seconds. Waves were hitting 2 and 3 feet and I could no longer hold my bearing. With a mix of and fear we decide to head river right, more with the waves then the wind and about two hours later we beached her on a sand bar. But, before I could get out of the kayak, the lake put one last wave completely over my head. We pulled our boats up, Roland pitched his tent and I didn’t see him for another 3 hours. I, on the other hand, reveled in my victory over this lake as she granted up a spectacular view of the Rockies on her western shore.

It rained and howled wind at us all night. I woke at about 3:30am and just laid there listening to the dark. Finally at nine I went to Roll’s tent. He was feeling much better, so we went for a walk. Rounding four huge points we realized we couldn’t place ourselves on the map, and that we were pinned. The wind was coming directly in the direction we needed to paddle. It blew so hard that we knew it would be futile to launch…Pinned…Pinned…We just waited for it to break. At 7:30 in the evening, the wind had died a bit and we decided to try and make some headway. Paddling directly into the waves and wind proved to be challenging. In no time it began to get darker and darker. Having no night vision, being in the middle of a throbbing lake at night just doesn’t seem to be my idea of fun. I however, finally over my stomach flu and not being afraid of the dark or the little waves was having a totally GREAT time, especially with John whining. (rt) Using a comet in the northern sky as a bearing we finally land and camp at a place I’ve come to call, “The Smell of Death Around You Beach.” I think John just needed a shower. Well, okay, both of us needed a shower. (rt)

Awake early in the morning to NO wind, but the temperature is definitely below zero. By continually paddling we finally reach the Canyon Ferry Dam. A little restaurant called Yacht Basin offers up little in the food department, pasties or chicken wings. We opt for the pasties….Bad Choice!!! At the dam we meet a “little” man, a very little man who thinks he owns this dam. Jim, the Facility Manager, turns out to be more of a hindrance than the dam itself. Its amazing, no matter where you go, no matter how desolate an area, jerks still abound! Finally a nice man named Bill lets us throw our boats on his trailer and he portages us around the dam. We pitch camp and crash.

WIND…WIND…WIND!!! Once again we are pinned, and this day there would be no getting out late. Camped beside us is Bob. A retired, divorced guy who lives in his beautiful fifth wheel trailer year around. Six months in Yuma, AZ, then six months here at Canyon Ferry. One thing Bob said that I found interesting, “I used to hunt all over these hills, but I don’t kill anymore, now I just watch.” We intend to launch early, wind or no wind.

Up at 7am and away we go! An occasional breeze and very cold, but a perfect day for paddling. Hauser Reservoir may not look big on a map, but it keeps going and going….The highlight of my day was a swan that let me get within ten feet of it before it offered up a spectacular take-off. Finally after five hours we reached Hauser Dam and Black Sandy Campground. Julie came with fried chicken and bisquits….Yum, Yum….real food!! Upon examining the Dam, we viewed with excitement something not seen for almost a week…Current. Tomorrow is supposed to be beautiful and we get to ride some current, excellent!